We’re supporting a raft of local sports clubs nominated by our team members across the DWS group of companies. Previously we’ve sponsored sports clubs in the Hull and East Yorkshire area under the Giacom banner, and now we’ve expanded the initiative.

We’re supporting a raft of local sports clubs nominated by our team members across the DWS group of companies.

Previously we’ve sponsored sports clubs in the Hull and East Yorkshire area under the Giacom banner.

And now we’ve expanded the initiative, having invited colleagues across the DWS group of companies to nominate grassroots sports clubs in their own communities. 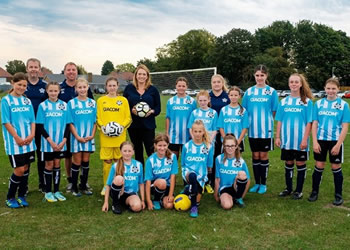 A total of 11 grassroots teams and clubs will benefit from our funding, having been put forward for sponsorship by team members with a personal connection to them.

Recipients of the funding in Yorkshire are:

These clubs outside Yorkshire are also receiving funding:

Rhiannon Beeson, Chief Marketing Officer at DWS, said: “To reinforce DWS’s commitment to local communities and to making DWS a great place to work, we wanted to do something which gave members of our team the opportunity to nominate causes which had a personal connection to them.

“We’ve previously done similar things at a regional level, but this is the first time the initiative has been rolled out across the wider DWS community.

“Through our ongoing sponsorship of Hull City, we’ve seen first-hand how important sport can be, not just to those playing, but also to families and the community. We wanted to extend this to a wider range of grassroots sports.

“It’s been brilliant to see so many of our colleagues nominate clubs and teams to receive funding. We wish all of the teams we’re supporting the best of luck.”

Tom Buil, Lead Software Developer at Giacom, has a daughter playing for Hessle Rangers Girls U13s and the sponsorship has enabled the club to own their own kit, complete with Giacom branding.

Tom said: “For the team to have their own branded kit is really special and I know it will mean so much to all the players.

“Grassroots sport plays such an important role in the lives of so many young people and I’m really pleased that our company values the positive impact it can have.

“I’m looking forward to seeing how the team gets on in the upcoming season, wearing their brand new kit, and I wish them every success.”

Culcheth Eagles Rugby League, based in Warrington, operates a number of teams including U11s Girls, U13s Girls, U14s Girls and U16s Girls. Our funding means the girls’ teams will play in their own jerseys for the first time.

Claire Chambers, Talent &amp; Recruitment Partner at DWS, has a goddaughter who plays at Culcheth Eagles.

She said: “For the girls to play in their very own kit will mean so much to them. Rugby is still a hugely under-represented sport for girls at school and, until now, the team has gratefully received kits passed down from the boys.

“The girls have such a fighting spirit and spend most of their weekend travelling to matches, training and competing. To have DWS backing them and cheering them on will give them such a huge boost.

“I’d like to say thank you on behalf of everyone at Culcheth Eagles and here’s to a successful season for all of the teams.